Bitcoin [BTC], the undoubted king of the cryptocurrency market, reinstated its dominance by anchoring a massive $20 billion rise in the collective market. After many analysts pegged altcoin to anchor a crypto bull-run, Bitcoin took the bull by the horns and lifted the market to an unprecedented four-month high, with significant gains unseen since the 2017 cryptocurrency boom.

Several reasons have been cited for this sudden upswing, from resolute protection against 51 percent attacks for the Proof-of-Work coin, officials at the SEC backing the idea of an imminent crypto-spring, and even an April fools’ article that stated that the Bitcoin ETF had been approved. However, from a market analysis standpoint, the shattering of one prominent level spelled the tale of BTC’s rise.

The 200-day moving average line, which tracks the average BTC price over a 200-day period, was broken on the back of this pump inducing a persistent BTC rise, which, at press time, still continued. It should be noted that prior to the aforementioned level being broken, the immediate resistance level of $4,200 was surpassed. Bitcoin broke the $4,715 moving average line, which analysts say will sustain its price.

Bitcoin’s massive price pump saw the king coin dominate the market share, with its share surging from 50.2 percent to over 52 percent in a matter of hours. Riding on the coat-tails of Bitcoin were several top virtual currencies in the market.

EOS, now on the fourth spot on the global coin market, surged following the release of the Weiss Ratings and the Bitcoin price pump.

After the Weiss report came out, the coin jumped by over 11 percent in the market and overtook Litecoin. The Bitcoin-EOS price propulsion saw the latter shoot up by 10.28 percent from $4.18 to $4.61 in a one-hour period. Since then, the coin sustained its price level and at press time, was looking to push further. EOS also broke the $4 billion barrier in this bullish swing, with the coin adding over $380 million in the past eight hours. 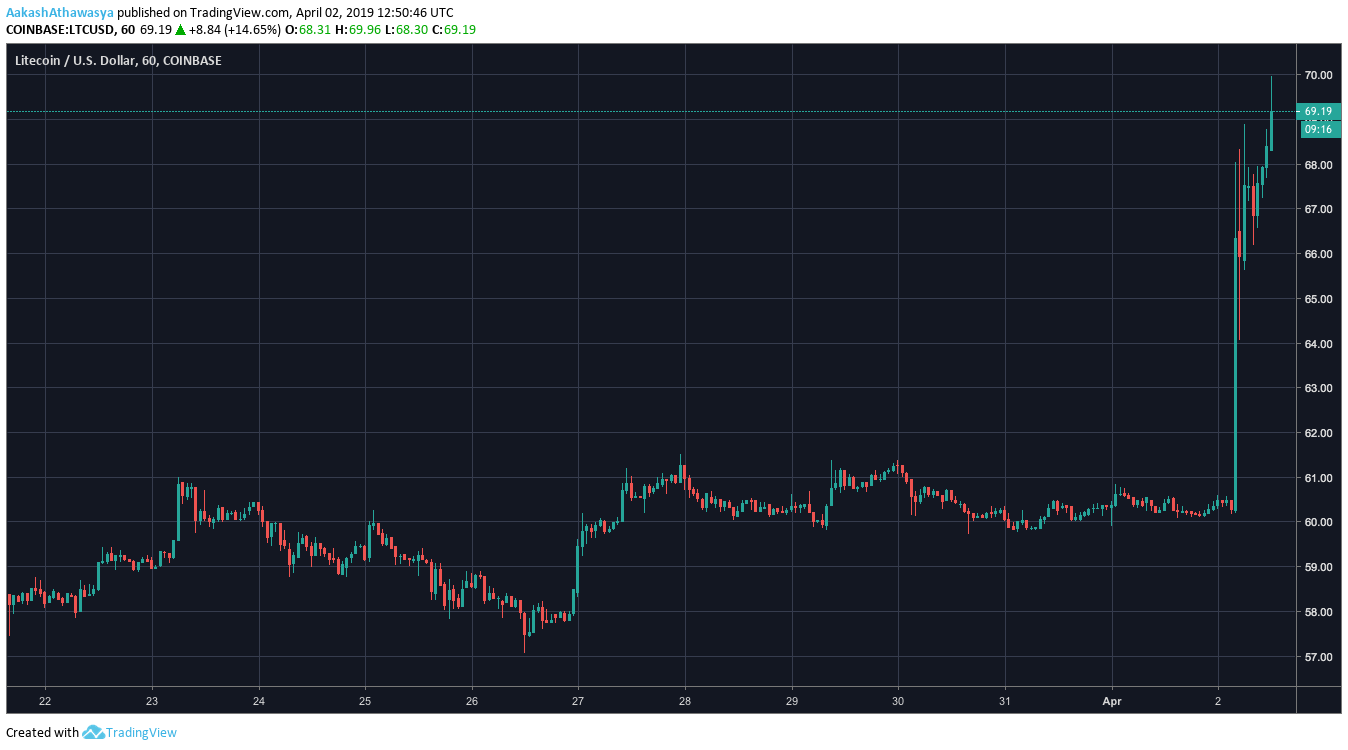 After being pegged down to the fifth spot on the coin ladder, Litecoin gained by 11 percent against the US Dollar in a 24-hour window. The silver coin rose on the back of its growing hash rates. Towards the end of March 2019, the LTC hash rate recorded was 321.35 TH/s, compared to its all-time high of 342.88 TH/s. The hash rate growth was a clear indication of the mining profitability in the Litecoin network.

A comparison of the hash rate pump and the Bitcoin-induced pump shows a gulf of difference. The former saw the coin rise by 4.25 percent to $62.98. However, the latter saw the coin push up by 11.39 percent to $67.57, with the coin’s price still on the rise. In terms of market capitalization, the coin added over $400 million in a matter of six hours. 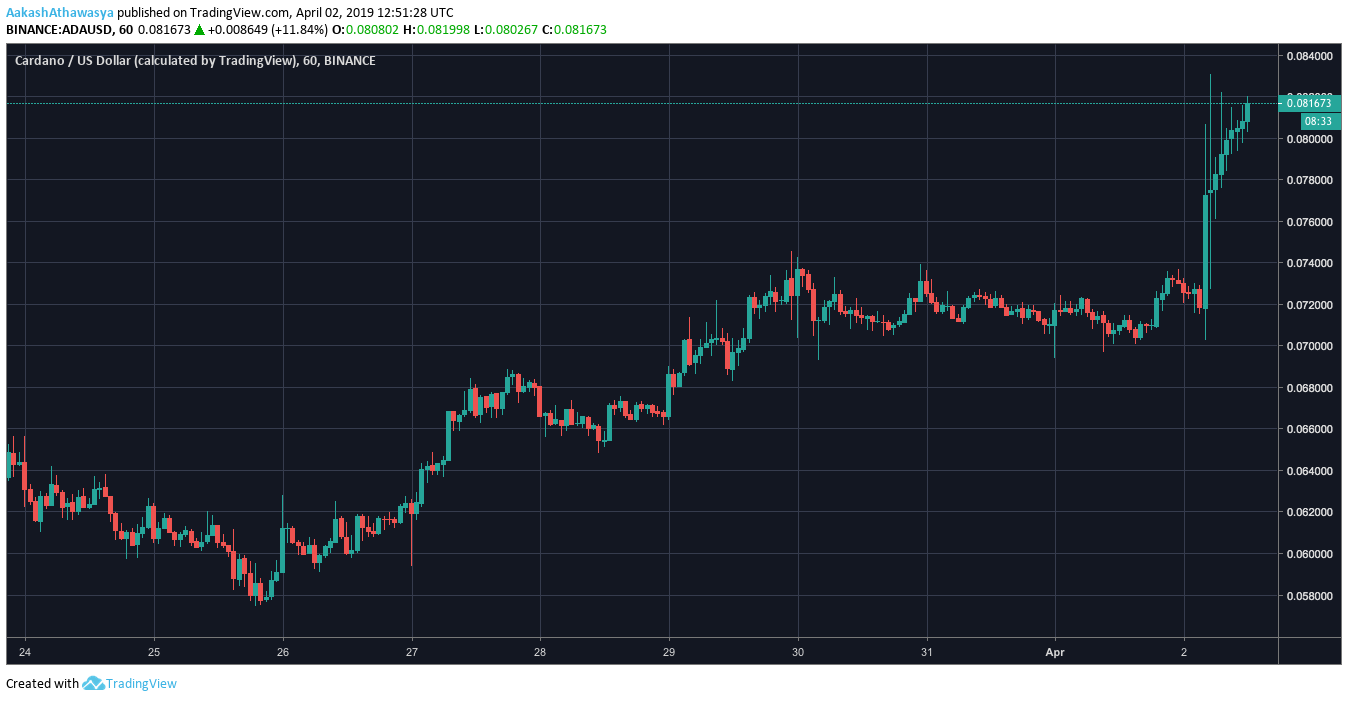 On the back of several announcements, ADA proponents have seen the coin’s price rise over 20 percent in the past few weeks. Ledger’s inclusion of the coin on their wallets saw Cardano surge into the top 10, while the 1.5 mainnet update added numerous features to the network.

Cardano’s first cycle of upward movement saw the coin reach 0.0727, on the back of a minor 4.45 percent rise. The downpour began at 0400 UTC when the coin’s price first rose by 7.75 percent in less than an hour, and then again by 6.72 percent in the next two hours as Cardano reached its highest price in over four months. Within the same period, the tenth largest virtual currency in the market added over $160 million and broke the $2 billion barrier. 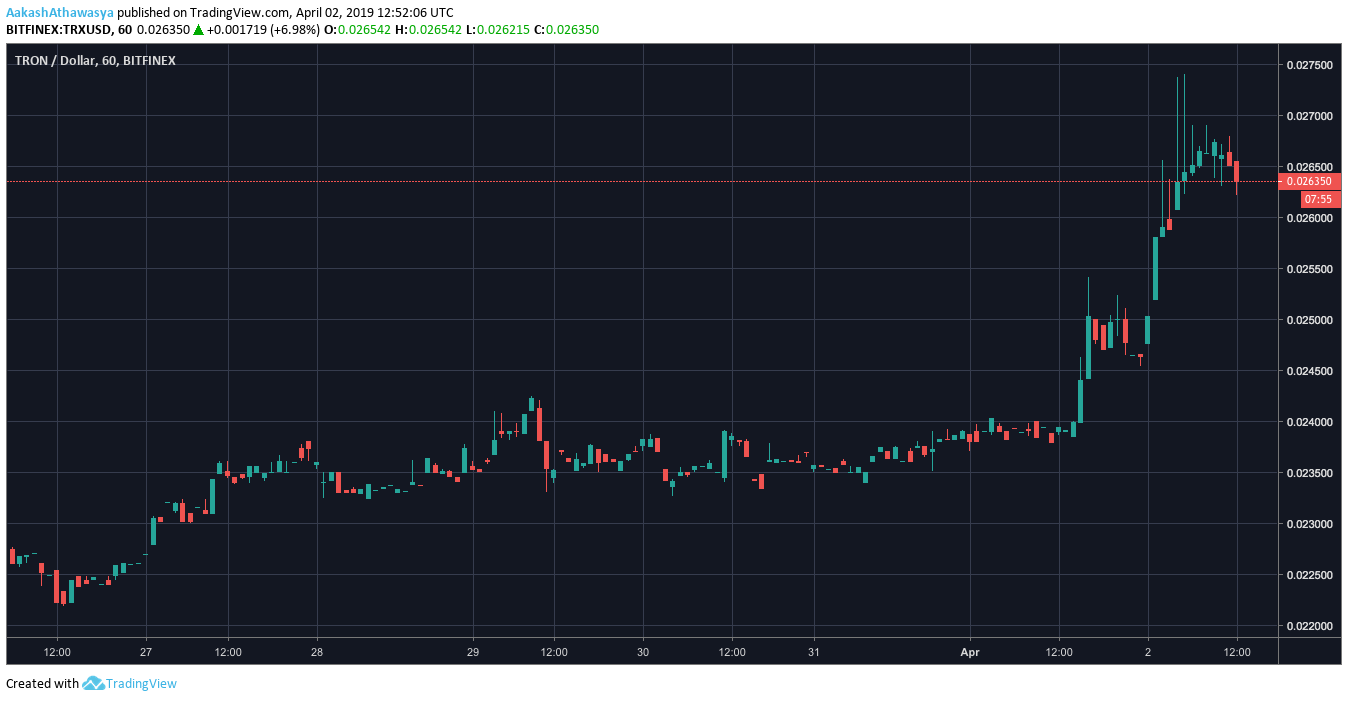 The DApp-heavy cryptocurrency was recently booted out of the top 10 by Cardano. However, the coin began the week on a high with positive news coming out of Japan. The Tron Foundation stated on 31 March that it became the biggest blockchain based DApps platform with a notable developer base. Further, Tokyo’s regulators will be working closely with Tron and will provide necessary support for applications to adhere to the stipulated rules.

The privacy-centric cryptocurrency also saw a massive price rise in the past few days. Prior to the BTC green wave, XMR proponents were buoyed by major announcements, including the Tokenomy listing and the Messari report on the cryptocurrency.

Bitcoin’s pump at the close of April 1, saw Monero trading at under $60, following which the first price pump pushed the coin up by 9.08 percent to reach $64.36 within a two-hour window. Thanks to Bitcoin’s pump, Monero overtook Dash [DASH] on the ladder adding over $100 million to its market cap in the process.

The bullish swing has not only allowed Bitcoin to reiterate its market dominance, but also contributed to many investors chiding the altcoin-fever for a return to Bitcoin maximization.