A closer look at Bitcoin and trading it

Understanding Bitcoin
can be a daunting task for the average investor. Bill Gates is against the use
of the cryptocurrency, citing its link to illegal drug purchases and that it
allows money laundering for illegal gangs.

In contrast John
McAfee, the founder of the antivirus software, is a fan and sees Bitcoin
trading at
$500,000 by 2020. Some see Bitcoin as here to stay and an it can only gain in
value, while others watch it as a strange, but interesting anomaly from the
sidelines. Making sense of it can be a challenge, but opportunities are to be
found for those willing to brave new territory.

Bitcoin itself is based
on a disruptive new technology called Blockchain. It has been said that just as
the internet changed the way we communicate, Blockchain will change the way we
do business.

Blockchain offers a
change in the way assets are transacted allowing for a decentralized shared
ledger. If that doesn’t help you much, here is an example of its use. In 2017
there was a Salmonella outbreak in Mexican papayas.

Normally tracing
products for a recall can take weeks, and sometimes months. However, via the
use of the Blockchain technology, Amazon’s tracking of the affected Mango fruit
only took seconds. If you spread the use of this technology across all
areas where traceability would be beneficial, such as pharmaceuticals, supply
chains, and land registries the advantage is obvious. Instant traceability,
easily accessible, will save time and expense.

Plenty of industries
waste millions and millions of dollars just waiting for supply chain
information to filter through. So, in a way, Bitcoin has become an expression
of this new pioneering technology.  The
mantra is set; invest in the future, invest in Bitcoin.

Assessing the true value of
Bitcoin

However, Bitcoin is a
fiat currency, so called because it is considered legal tender, but
is not backed by a physical commodity. Unlike Gold or Copper for instance.
So, in this sense, the value of Bitcoin (BTC/USD) is determined by the value
ascribed to it by two parties agreeing on its value.

The agreed value of
Bitcoin, perhaps rather unsurprisingly, has been particularly volatile as
people consider its true value. At the start of 2017 Bitcoin was trading at
around $1,000. In December of 2017 price rose nearly as high as $20,000. That
is one wild ride. Price is currently sitting at around the $6600 handle.
Volatility, while posing large risk if improperly managed, can also provide
great trading advantages.

With such varied and
intense interest technical analysis allows traders to define and limit their
risk as they navigate the volatile price of Bitcoin. For example, the 100 daily
moving average provided investors two excellent places to buy BTC/USD In July
and September of 2017. Many traders used these levels to lean against as they
bought into the quick ascent of Bitcoin in the second half of 2017. 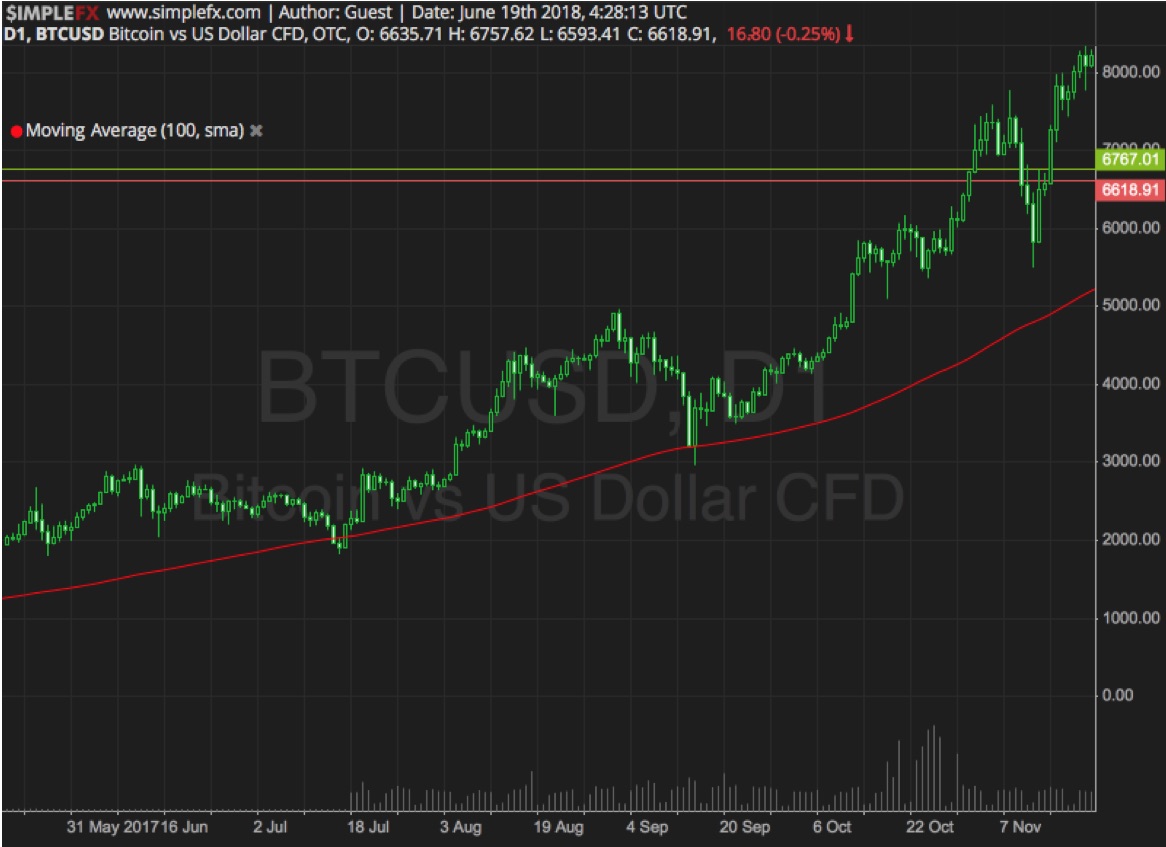 Again,
In January of this year, a daily supply level was formed which led to falls in
Bitcoin during February and March. The demand level formed in the $5,000 to $8,000
region and led to a rise in March this year as price just shrunk back from the
$1,000 handle. 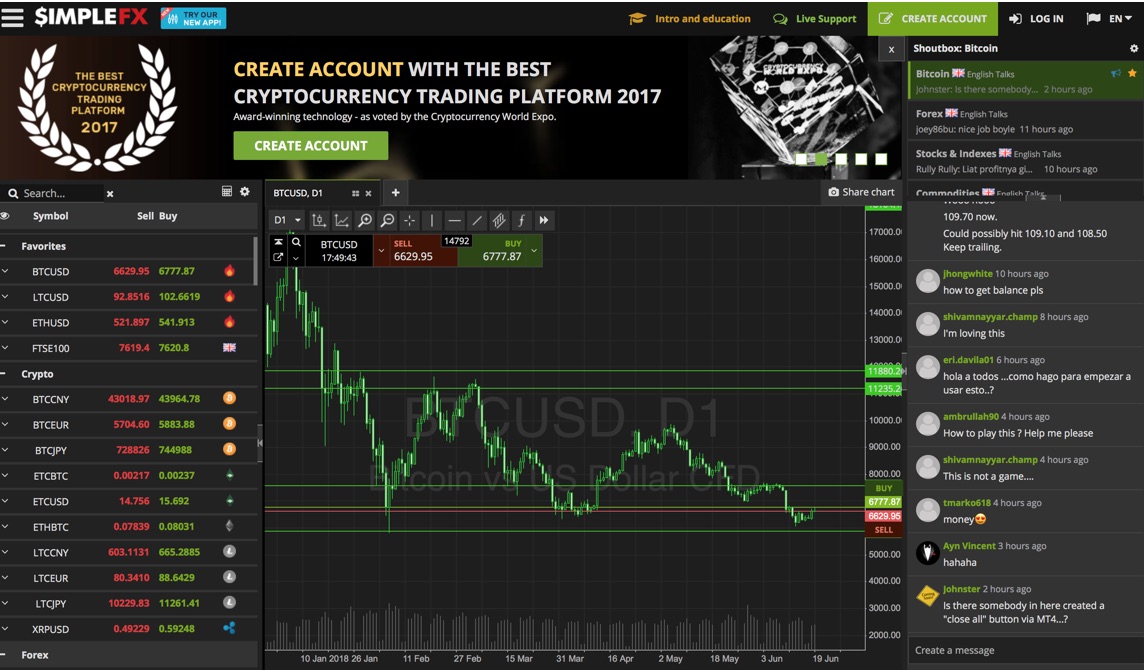 In the chart below price
approached the $10,000 handle in April and May. As it headed towards the upper
end of the Bollinger bands, indicating an overbought market, that region
coincided with the 200 daily moving average.

Traders leant against
that level and price was contained before it dropped to approach the yearly lows
at around the $6,000 handle in June of this year. Traders defined and limited their risk using the
200 DMA as a reference point. 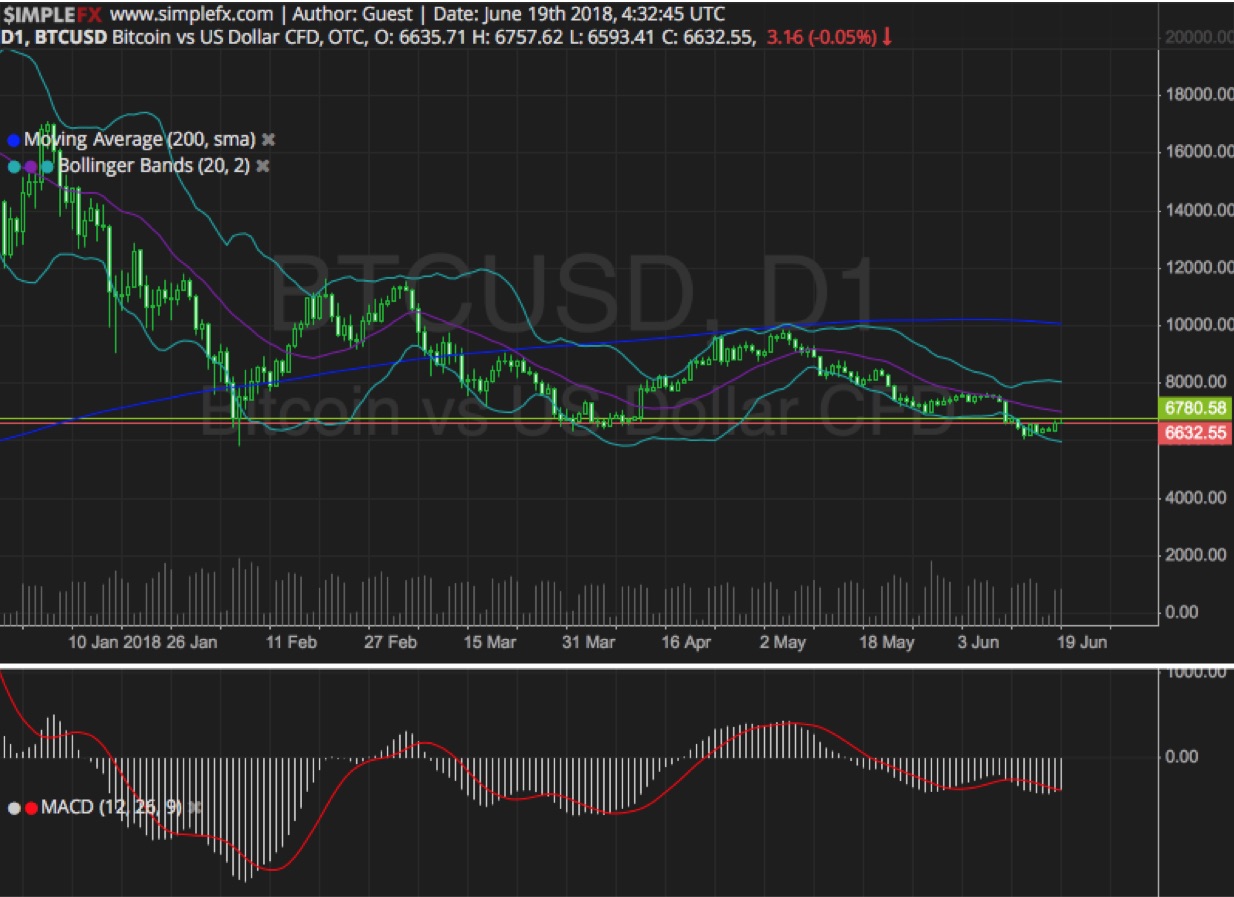 So, Bitcoin may be the
shop window for a new technology, but it trades in a very traditional way using
technical analysis. This is, after all, probably unsurprising seeing as traders
around the world share the same tools of their trade in order to define and
limit their risk.

Whether it be Fibonacci
retracements of recent swings, support and resistance levels, moving averages
or any other form of technical analysis; BTC/USD is ready to be bought and
sold. There are also great trades to be had as different comments are made
about the viability or otherwise of Bitcoin.

When JP Morgan’s Jamie
Dimon called Bitcoin a fraud in September 2017, the value plummeted 8% in just
one day. A tidy profit can be made there for the observant market participant.
In February of this year the value rose by 9% in a day on news that regulation
out of South Korea was going to be softer than the market anticipated. Everyone
wants to know; will Bitcoin last or fade?

Whether, Bitcoin
appreciates or depreciates, opportunities present themselves for those willing
to brave the new world of Bitcoin and trade a complex technology in a simple
way using time honored technical analysis. Bitcoin presents a wealth of
opportunities for those prepared. Trade wisely, trade simply.