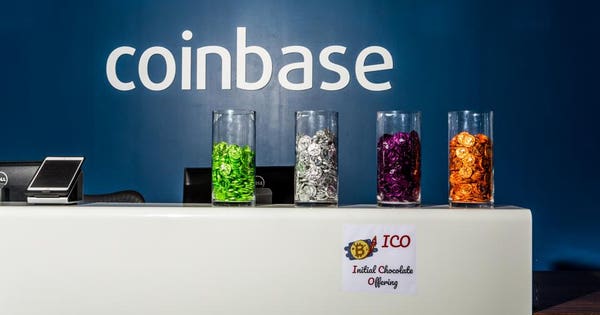 The UK’s looming exit from the European Union (EU) has already had a measurable (albeit smaller than expected) effect on London’s established financial services industry but it is now weighing on the country’s burgeoning bitcoin and cryptocurrency sector.

U.S.-based Coinbase, one of the world’s largest cryptocurrency exchanges and wallet providers, has revealed it is today opening a Dublin office to help deal with the potential Brexit fallout.

Coinbase, which has been targetting European expansion in recent months to offset this year’s global fall in bitcoin and cryptocurrency trading volumes, has been operating in Europe since 2014 and has had a dedicated London office since last year. The London office will remain its European headquarters, Coinbase said in a statement.

The Coinbase headquarters in San Francisco. (Photo by Christie Hemm Klok for The Washington Post via Getty Images)

“Our Dublin office signals Coinbase’s growing presence in Europe and will complement the operations of our London hub, which will remain our European headquarters,” said Zeeshan Feroz, UK chief executive of Coinbase. “When considering the location of our second European office, Dublin was the clear choice — it’s an English-speaking EU member state that boasts a diverse talent pool, entrepreneurial spirit, and long-standing support for technological innovation.”

Last week the UK government said it expects thousands of financial services jobs to have moved to the EU when the UK leaves the trading bloc in March next year.

While the majority of financial services firms have held off from making firm commitments to move staff out of London many are known to have left negotiation options open for office space in Amsterdam, Dublin, Frankfurt, and Paris.

Yesterday UK prime minister Theresa May said a Brexit deal — meaning the UK and the EU will have a bespoke trading agreement from the moment the UK exits the bloc — was “still achievable” despite negotiators hitting last-minute hurdles in weekend talks.

Some however think that plans to move finance jobs out of London have been overstated, with a Reuters September poll revealing as few as 630 UK-based finance jobs have been shifted or created overseas with just six months to go before Brexit, a far lower total than banks said could move after Britain’s surprise vote to leave the EU.

Respondents said they’re holding out for a deal to be done between the UK and the EU. The survey findings suggest London is likely to remain the world’s largest center of international finance after the UK quits the EU trading bloc, according to Reuters.

“We explored a variety of cities across the EU, and Dublin was the clear choice,” Coinbase said in a statement. “Our new office will help us tap into the city’s diverse talent pool and long-standing support for technological innovation, including a burgeoning cryptocurrency economy.”

In August it was reported that Ireland’s allure as a post-Brexit base for many financial firms looking for a new route into the EU has driven wages for some roles considerably higher.

Some positions were found to be going at a 15% premium on a year ago, Reuters analysis found.

“Dublin is a talent hotspot for companies like Coinbase as they scale and internationalise critical businesses operations,” said Martin Shanahan, CEO of IDA Ireland, the country’s inward investment agency. “We look forward to welcoming Coinbase into the Irish economy and helping them access our talented pool of young professionals from the technology and financial services sectors.”

Coinfloor, the UK’s oldest bitcoin exchange, will be formally regulated as a so-called “distributed ledger technology (DLT) provider” under Gibraltar’s new rules for fintech companies that use blockchain technology, according to the website of its financial watchdog.

It is currently unclear however exactly how Gibraltar, a British territory on the southern tip of Spain, will be involved in the UK’s exit of the EU next year.