Gary Gensler headed the Commodity Futures Trading Commission from 2009 to 2014.

A decade after the financial crisis , The Wall Street Journal has checked in on dozens of the bankers, government officials, chief executives, hedge-fund managers and others who left a mark on that period to find out what they are doing now. Today, we spotlight former Citigroup CEO

and the former chairman of the Commodity Futures Trading Commission,

In short order in the past few years, Gary Gensler went from cleaning up the fallout from the financial crisis to grappling with the challenge of cryptocurrencies.

Mr. Gensler, a former Goldman Sachs Group Inc. partner with close ties to Bill and Hillary Clinton, became chairman of the Commodity Futures Trading Commission in 2009, one of the most difficult moments for the U.S. economy in decades. At the CFTC, Mr. Gensler helped craft and implement a new oversight regime for the swaps market, which was largely unregulated before playing a central role in the crisis.

The slight, balding Baltimorean developed a reputation among his colleagues for bare-knuckle tactics as he drove relentlessly to create a regulatory framework for swaps. By the time he left the commission in 2014, the rule set was largely complete, years before other regulators wrapped up their postcrisis work.

Now, after serving as finance chairman for Mrs. Clinton’s second failed presidential campaign, Mr. Gensler has shifted to thinking about new frontiers of potential systemic risk and financial innovation by lecturing about blockchain technology and cryptocurrencies at the Massachusetts Institute of Technology’s Sloan School of Management. 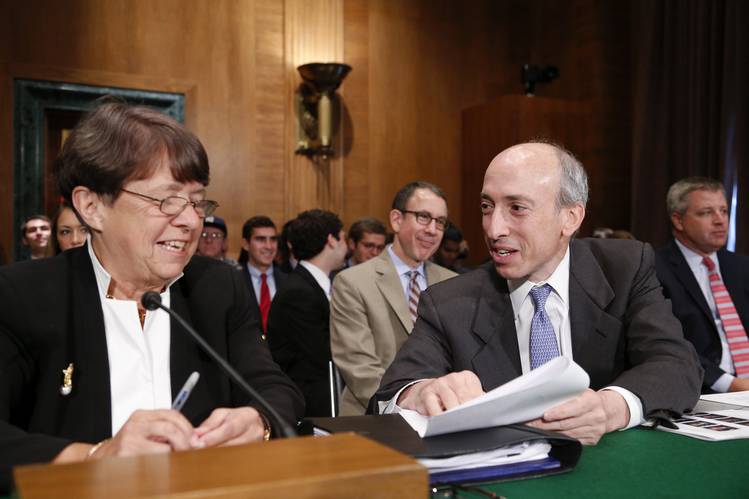 In general, Mr. Gensler is bullish on blockchain, which he says mimics the distributed nature of society. But his years cleaning up the wreckage of the financial crisis have left an imprint, and he says he can’t look at a fast-growing financial technology phenomenon without a sober assessment of its associated risks.

“In the late ’90s, I was part of the broad consensus saying certain things, like derivatives markets, wouldn’t undermine financial stability,” Mr. Gensler said in an interview. “But guess what, it did. Eventually we addressed that as a nation and brought it into the public policy envelope.”

Mr. Gensler, 60 years old, says he has no plans to get involved in the 2020 presidential campaign or the 2018 midterms, other than serving as an informal adviser to Democrats who want to pick his brain on various issues.

He has also made himself available to policy makers of both parties as they grapple with how to regulate cryptocurrencies. Earlier this month he testified before a House committee full of members who worked with him during the financial crisis, but also others who, seemingly unaware of his work in Washington, called him “professor.”

Regardless of whether he re-enters the policy or political arenas again, it will be hard to top the thrill and responsibility of running a major regulator during the first half of the Obama administration.

“I don’t think I’ll ever get to do something as meaningful as coming in after a crisis and helping to clean in up,” Mr. Gensler said.