Some said it was dead, some said glory days were over, but smart money knew that it was the best time to take leverage of the situation. Today, Bitcoin price crossed the $5,000 touching the highest level since November 2018. In terms of percentage move, it was more than 20 percent move and it occurred at 06:21 AM London time. At the time of writing this article, Bitcoin price moved back below the level of $5,000, but I believe this is only a temporary aspect as long as the momentum hold. This is because since touching its lowest point of $3136 back in December 2018, bitcoin price has scored 61 percent gain and year-to-date it is up nearly 25 percent.

Bitcoin is a kind of a beast which has the ability to score more than 20 percent gain on a daily basis and we have seen this kind of rally towards the end of 2017 before the price crashed when it touched the all-time high of $20K (approx.). However, it has been a long time that we have not seen a move look like today and it is going to attract many investors who have been sitting on the sideline and waiting for this moment.

Good news doesn’t stop here for the bulls. Something which may attract retail money comes from the fact that we have six consecutive weeks of gains, a trend which is not seen since the price made all-time high. The below chart shows this trend. 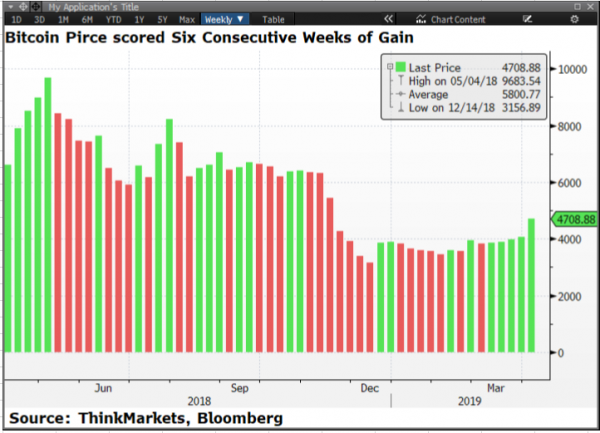 As for the other top two coins by market volume: Ethereum and XRP, we have not seen that much of enthusiasm yet. Remember, Bitcoin is the trendsetter for the cryptomarket and the spillover effects are inevitable.

Looking at the XRP price, it appears that the support of $0.30 is firmly in place and as long as this hold, I think the path of the least resistance is to the upside. Moreover, it is important to keep in mind that it is a lot easier for XRP price to grow by 2X or 3X as compared to the Bitcoin price. We have seen this concept many times in equity markets where a large-cap stock takes some time to score 100 percent gain as compared to some low price and high potential stock.

In summary, as I explained in my last article, the smart money is mostly interested to get involved in a bear market because the risk to reward ratio is at its peak. Bitcoin has the potential to topple the $100,000 mark and it is only a matter of time when this becomes a reality. I am not saying that fiat money is going to vanish, but the way the central banks are managing the monetary policy, and levels of government debts, are going to bring the shine in the Bitcoin’s price.