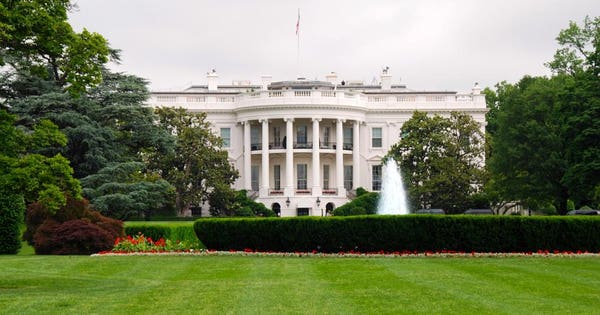 outside view of the White House in Washington, D.C.

Hours after the White House’s “Social Media Summit,” which, according to CNN, “Included a conspiracy theorist, a meme creator, and a plagiarist,” President Trump took to Twitter in a cryptocurrency-bashing tweetstorm.

He denounced Bitcoin, the cryptocurrency with the highest market cap, and Facebook’s Libra cryptocurrency, citing volatility and lack of dependability. The White House did not invite Facebook to its social media summit held on the same day as the tweet.

“I am not a fan of Bitcoin and other Cryptocurrencies, which are not money, and whose value is highly volatile and based on thin air. Unregulated Crypto Assets can facilitate unlawful behavior, including drug trade and other illegal activity….”

“….Similarly, Facebook Libra’s “virtual currency” will have little standing or dependability. If Facebook and other companies want to become a bank, they must seek a new Banking Charter and become subject to all Banking Regulations, just like other Banks, both National…”

….Similarly, Facebook Libra’s “virtual currency” will have little standing or dependability. If Facebook and other companies want to become a bank, they must seek a new Banking Charter and become subject to all Banking Regulations, just like other Banks, both National…

The cryptocurrency community took up arms on Twitter, with a range of responses. Here are the top 8:

1/ Mr President—#Wyoming, the state that gave you the highest margin of victory in 2016 (even bigger than Reagan), welcomes law-abiding #crypto companies & created a new type of bank charter to allow them to comply w/ the law. You are just wrong on this—ur staff is misleading you

(2) @codeyisfun – Moving his fiat into Bitcoin.

Just dumped my 401k into bitcoin

(3) Preston Byrne – Despite voting for the President, does not agree with the anti-Bitcoin sentiments.

Hey. I'm basically the only guy in the crypto industry who voted for you (or admits it). Can I convince you otherwise?

(4) Emily Parker – Cites her 2018 article, “Bitcoin is Bigger Than Trump: Bitcoin Resists the Trump News Cycle, At Least for Now,” and contemplates if Bitcoin will maintain its immunity.

Trump just tweeted about Bitcoin for the first time ever, saying “I am not a fan of Bitcoin and other cryptocurrencies.” Until now, Bitcoin has been relatively immune to the Trump news cycle, as this older article explains. We’ll see if that changes https://t.co/BOI61pTPt8

(5) Tyler Winklevoss via Gemini – Putting faith in the math.

“We have elected to put our money and faith in a mathematical framework that is free of politics and human error.” – @tylerwinklevoss

(6) Neeraj K. Agrawal – A cashless society is a surveillance society.

Without cryptocurrency, a cashless society is a surveillance societyhttps://t.co/t0BTlZHZXR

(7) Bitcoin Magazine – Cash is a better tool than Cryptocurrency for money laundering.

Untraceable, physical cash is the best tool for facilitating drug trades and unlawful activities, not a public ledger that records the history of every transaction ever made.

#bitcoin is going to replace gold.