January 25, 2021
Trending
Home Ethereum Bitcoin vs. Ethereum: Stacking up a currency against a supercomputer

These two very different blockchains now have the two largest market caps of any cryptocurrencies, with BTC at $128,469,761,721 USD at time of writing, and ETH at $58,534,876,766 USD. But beyond their mutual success, how have these two cryptocurrencies performed relative to each other over the years?

Here’s how Ethereum stacked up to Bitcoin back then, on August 7, 2015: 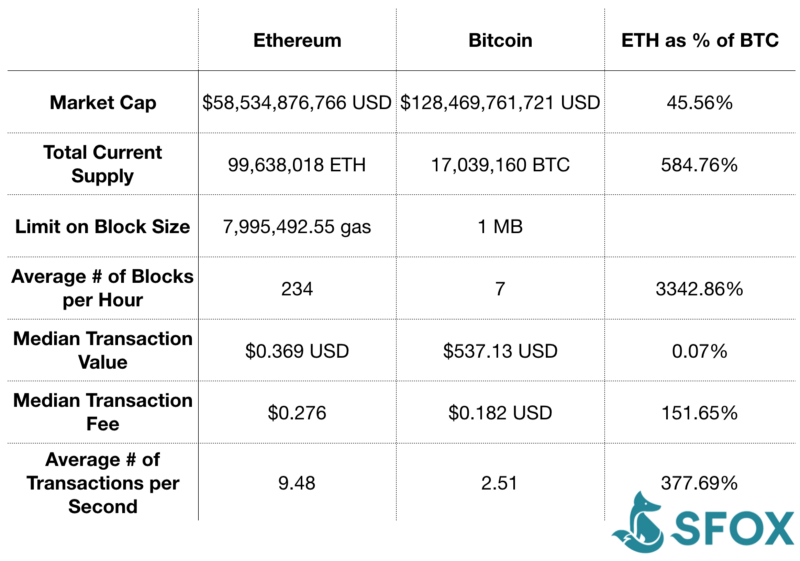 For some time Ethereum has been the second largest cryptocurrency by market cap. But, contrary to what groups such as those advocating “The Flippening” would have you believe, this growth isn’t the story of one cryptocurrency fighting to eclipse another: rather, it’s the story of two very different kinds of projects succeeding, driving the growth of a whole new sector.

Bitcoin and Ethereum have radically different use cases

How would you compare Apple to Amazon? Sure, they’re both publicly traded technology companies, but they’re also businesses with totally different goals, business models, and products.

That’s what it’s like to compare Bitcoin and Ethereum: even though they’re both leading blockchain networks, they have totally different goals, use cases, and design philosophies.

You can see this in the structure of each network. Coding for Bitcoin is like writing assembly code, whereas coding for Ethereum is much more flexible and capacious. This is no accident:

Fundamentally, Ethereum is a platform,  “a blockchain with a built-in fully fledged Turing-complete programming language that can be used to create ‘contracts’ that can be used to encode arbitrary state transition functions,”whereas Bitcoin is more of a currency. Therefore, Ethereum isn’t competitive with Bitcoin: unlike Bitcoin Cash, which intends to supplant Bitcoin as a form of digital cash, BTC and ETH can and have grown without cannibalizing each other.

The smart contracts that operate on Ethereum’s virtual machine are empowering developers to build everything from collectable, non-fungible cartoon cats to decentralized securities exchanges. This platform-oriented design has led increasingly more developers to rally around Ethereum, which has been reflected in the growth of the network’s annual developer conference, Devcon: in three years, it’s grown from 50 attendees to over 2,000.

People have recognized the value of Ethereum as a platform, which is most obvious in the amount of money that’s been put into ICOs by startups issuing tokens built on the Ethereum network. In 2017, over $5.6 billion was invested in ICOs; that entire amount was surpassed by the first three months of ICO investment in 2018, which totaled $6.3 billion.

The heavy focus on ICOs in the press might make you think that all the developers are flocking to Ethereum from Bitcoin, but that’s not the case. In fact, if you take a look at Github, you’ll see that ‘Bitcoin’ is mentioned in almost 60% more repos than ‘Ethereum’ is.

How can we make sense of the discrepancy between the many public development projects on Ethereum and the broader development community behind Bitcoin? This seems to be a case of breadth vs. depth: whereas Ethereum has people working on a huge diversity of projects (ICOs, layer 2 protocols, etc), Bitcoin has many people working on a single thing (Bitcoin). The difference in the cryptocurrencies’ communities, in other words, reflects the difference in their use cases.

Ethereum has grown faster than Bitcoin

A product that invents a new market will have to work hard to get traction. The products that follow it in that market will have a correspondingly easier time getting traction. Only by carving out their own niches will these different products survive in the long run. You can see this all over the place:

Ethereum also captured a fair amount of overall market dominance from Bitcoin fairly quickly, despite the fact that it was relatively late to the cryptocurrency space and Bitcoin had the advantage of being the first cryptocurrency.

As with products in other sectors, the first mover (Bitcoin) and the follow-up (Ethereum) have been able to both survive because they are complementary, rather than competitive. People can and do endorse both Ethereum as a platform and Bitcoin as a store of value. And, all things considered, it’s probably better that Bitcoin came first: the notion of “digital gold” is easier to grasp than a “decentralized supercomputer,” meaning that BTC probably primed people to understand ETH’s value proposition more readily.

Scaling is a more pressing issue for Ethereum than for Bitcoin

Both Ethereum and Bitcoin need to handle many more transactions than they can at present — but that need is more urgent for one of them than it is for the other.

To get a rough-and-ready handle on orders of magnitude, think about the transaction goals of Bitcoin and Ethereum as similar to those of VISA and Facebook, respectively.

Assuming that Bitcoin wants to have the transactional capacity of VISA and Ethereum wants to be able to support dapps as far-reaching as Facebook, Ethereum has to be able to handle transactions that are an order of magnitude greater than Bitcoin’s. This is why Ethereum is pursuing a slew of scaling solutions (Casper, Raiden, Plasma, Sharding) whereas Bitcoin is only really focused on the Lightning Network.

Over time, it’s virtually inevitable that both Bitcoin and Ethereum will scale significantly. But right now, it’s more important for a decentralized supercomputer to handle tons of transactions than it is for digital gold or digital cash.

The future of Bitcoin and Ethereum: a complementary ecosystem

The success of Bitcoin and the success of Ethereum are not mutually exclusive. In fact, having robust developer communities behind both cryptocurrencies does a lot to improve the chances of crypto succeeding as an entire sector. Ethereum may be chasing Bitcoin in terms of market cap, but both BTC and ETH are still very much in the early days of growing and maturing. Time will tell what lies ahead for their communities.

Akbar Thobhani is the CEO of SFOX — a broker-dealer for institutional cryptocurrency trading. He started his career as a software engineer at JPL / NASA, and began mining bitcoins while attending MIT. Akbar was head of growth and business development at Airbnb.  Specializing in trading and payments platforms, he has developed solutions for ITG, Boku, and Stamps.com. Article originally published here.