The collective cryptocurrency market witnessed a roller-coaster weekend as the market cap soared to its highest point of this calendar year to an unprecedented $143.9 billion valuation on February 23. On the following day, however, the bulls were outmatched by the bears. Buoyed by market correction forces, the coin market fell down by $16 billion in less than 24 hours to drop to levels that the market didn’t see since the bullish resurgence began.

Ethereum [ETH], the top altcoin in the market, is reeling from an unexpected price decline that brought down the coin’s price by double-digit figures in the past 24 hours.

Ethereum declined against the US dollar by a mammoth 14.15 percent and the price of Ether now stands at $140.45, back to the pre-bullish levels recorded on February 18. This fall preceded a period when the coin rose to $165.52 and saw its highest price point in the past three months.

On February 24, the coin had a market cap of $17.36 billion and since then, it fell to $14.54 billion before adding over $400 million to the market cap in less than five hours. Following yet another market cap decline to $14.22 billion, the coin’s lowest market in over a week, Ethereum rose mildly to its current market cap valuation of $14.77 billion. 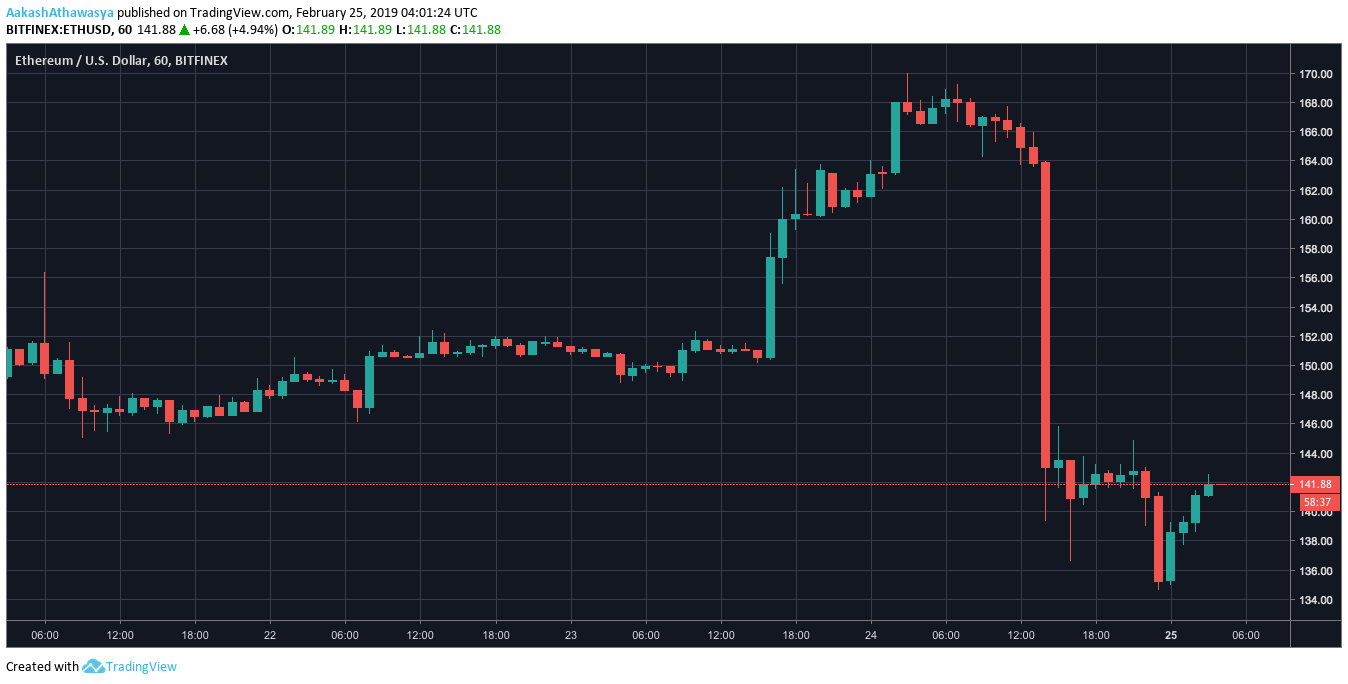 Since the beginning of the year, Ethereum has been in a constant tussle with XRP for the mantle of the top-altcoin. The two swapped positions in January and after regaining the top spot in the second week of February, Ethereum has not let-up against Ripple’s XRP. Despite the two coins declining at press time, Ethereum increased its market cap lead over XRP by almost $2.1 billion.

XRP also declined, registering a 9.95 percent decline against the US dollar. The coin traded at $0.305, after rising to a high of $0.339 during the earlier part of the weekend. The payment-centric cryptocurrency saw two price spikes in February; the first on February 19 when the collective market climbed above the $130-billion market cap mark, and the second when the market rose recently. XRP now poses a market cap of $12.61 billion, an 11.02 percent decline compared to the market cap 48 hours earlier [$14.02 billion].

Other than the top-two altcoins in the market, several other coins have also lost a significant amount of their trading price as the bears ran amok in the market. Bitcoin’s [BTC] sudden fall from the $4,200 price point to the valuation of under $3,845 has anchored the decline, as the top coin’s volume accounts for over 52 percent of the entire cryptocurrency market.