Litecoin (LTC) has seen a dramatic increase in price over the course of 2019, surging a staggering 183% from $30 up to the current price of $57. What is driving the price of the fourth largest cryptocurrency in 2019?

The LTC halving is set for August 2019

Litecoin operates much like Bitcoin, and will also be performing a reward halving. Unlike Bitcoin, the halving is set for August 2019 while Bitcoins next halving is set for May 2020. The LTC halving will see the mining reward per block cut down from 25 LTC down to 12.5 LTC. In the past, reward halvings have caused the token price to increase before the halving occurs. In the months leading up to the 2015 LTC halving, the coin rose over 700%. LTC is currently in the same trend since January.

Read more:  Litecoin might jump XRP by the end of 2019

BTC has always seen an increase in price following the halving of block rewards. The trend has proven to be true in the past two halving and there is no reason why it should not be true for bitcoins 2020 halving. 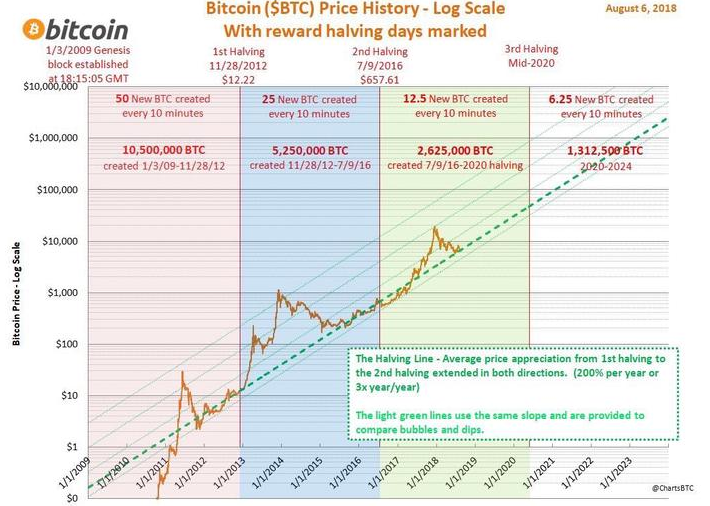 Litecoin is a proven cryptocurrency

Litecoin has proven itself to be a real digital asset over the past few years. The project, which was founded by Charlie Lee in 2013, makes it one of the oldest projects that are still relevant, only beaten by Bitcoin. Litecoin has remained and continues to remain relevant in the crypto industry.

Litecoin continues to develop and evolve

Litecoin might be the fourth biggest cryptocurrency in the world, but that has not stopped the team from continuously pushing upgrades and development on the project. Litecoin founder Charlie Lee recently admitted that he is “now focused on making Litecoin more fungible by adding confidential transactions.” Lee clearly has big plans for Litecoin to continue pushing the project with new features.

Fungibility is the only property of sound money that is missing from Bitcoin & Litecoin. Now that the scaling debate is behind us, the next battleground will be on fungibility and privacy.

I am now focused on making Litecoin more fungible by adding Confidential Transactions. 🚀

When it comes to marketing, LTC is not shy to splash the cash to get the LTC name out in the public. Litecoin has most recently partnered with the Ultimate Fighting Championship (UFC) for UFC 232. The UFC, which was last evaluated to be worth over $7 billion by Forbes Magazine, featured the Litecoin logo in the octagon for UFC 232. The event which was viewed to millions of UFC fans across the globe would have received plenty of attention. This easily could have caused an increase in the price of Litecoin.

Excited to announce that the Litecoin logo will be on the canvas as the Official Cryptocurrency Partner of @UFC 232 on 12/29 in Inglewood CA! Read more: https://t.co/y4yvPWb6rj pic.twitter.com/ddML54j5GH

Ultimately, LTC has proven to be a project that has stood the crypto test of time. Founder Charlie Lee continues to remain active with his project and is now looking to create privacy features to the project as well. Litecoin will continue to market itself to the world in an attempt to push mainstream adoption. If Bitcoin can reach $20,000 again in the future, there is no reason why the world’s fourth most popular cryptocurrency, the little brother of Bitcoin, cannot reach $300 once again.

Chepicap is here for you 24/7 to keep you informed on everything crypto. Like what we do? Tip us some Satoshi with the exciting new Lightning Network Tippin.me tool!

Read more: How to tip and receive Bitcoin via the Lightning Network with Tippin.me