Litecoin, once the bitcoin’s closest rival, has beaten almost all the top crypto assets in terms of year-to-date (YTD) performance.

The LTC/USD instrument has printed a 164.14 percent adjustable gains in 2019, bringing its total rebound to a total of 256 percent. Compared to other top dollar-based cryptocurrency instruments, Litecoin is only behind Binance Coin’s BNB token and Tezos’s XTZ, whose YTD performances are 292.43 percent and 177 percent, respectively. At the same time, bitcoin’s YTD performance sits at 54.80 percent.

The May 3 bitcoin price rally has further improvised upside sentiments in the cryptocurrency market. Litecoin, again, is benefitting hugely from it. The LTC/USD rate today crossed above $80, accompanied by a decent volume. The pair is signaling another upside push to reclaim its 2019 high towards approx $100.

The session-to-session surges are purely technical. The speculation about bitcoin establishing a bottom has allowed traders to enter the market at fresher higher highs. Bulls believe that bitcoin can retest $6,000 – a healthy support level during the asset’s downtrend from $20,000-high – in near-term. The rest of the market is merely reacting to the sharp moves in the bitcoin market.

That does not mean the Litecoin price jump is speculative. There is a Harry Potter spell working as a strong fundamental to – at least – ensure reliable support for litecoin.

The Litecoin price leap has accelerated specifically upon the creator Charlie Lee’s announcement of Mimblewimble. The protocol, named after a tongue-tying spell from the Harry Potter universe, proposes to make Litecoin a more scalable and private coin. These are the two of the most sought critical ingredients in any cryptocurrency these days.

Litecoin dev team spent hours discussing how to add Confidential Transactions. The way to do a softfork CT is very similar to doing extension blocks and extension blk may be simpler and can do a lot more. We are now also exploring doing bulletproof MimbleWimble w/ extension blks. pic.twitter.com/ePBh8PKNu8

“We have started exploration towards adding privacy and fungibility to Litecoin by allowing on-chain conversion of regular LTC into a Mimblewimble variant of LTC and vice versa,” Beam, Litecoin’s software development partner, wrote in a Medium post. “Upon such conversion, it will be possible to transact with Mimblewimble LTC in complete confidentiality.”

A mere announcement does not mean that Litecoin is close to updating its protocol. Nevertheless, it is adequate to keep the community’s interest intact especially after Lee’s decision to sell all his LTC holdings, which stirred quite a controversy. 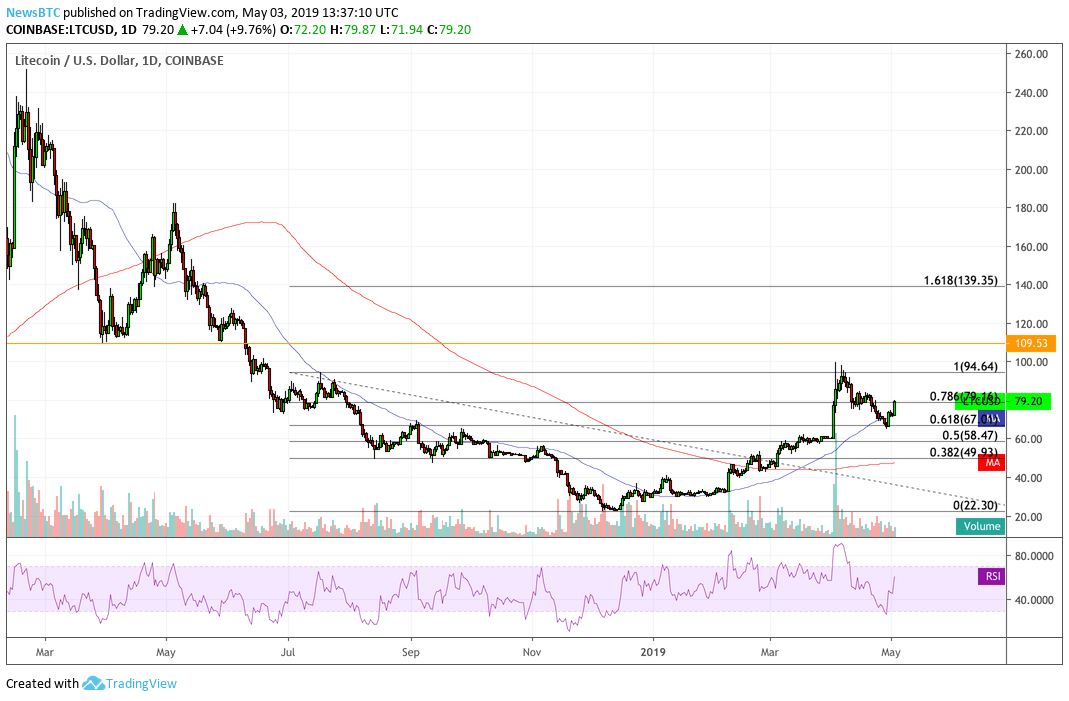 The litecoin price is now testing $79.16 as its temporary resistance. The Relative Strength Index (RSI) shows that there is still a room for a continued bull momentum towards $94.64 before the next downside correction comes into view.

Nevertheless, it is the $109.53-resistance level that could confirm a long-term bullish bias for Litecoin. The line served as strong support during Litecoin’s downside action in five separate instances in 2018. That said, a close above $109.53 could signal Litecoin to push towards $139.35, creating a decent long opportunity for traders.

[Disclaimer: Cryptocurrency trading involves substantial risk of loss and is not suitable for every investor.]