VeChain Foundation tweeted about an open-letter that Sunny Lu, CEO at VeChain, had written to his community members about Xiaoning Nanning, the CEO of OceanEx. This comes after the Foundation announced the launch of OceanEx , a Digital Asset Exchange-Based Ecosystem which is powered by VeChain. 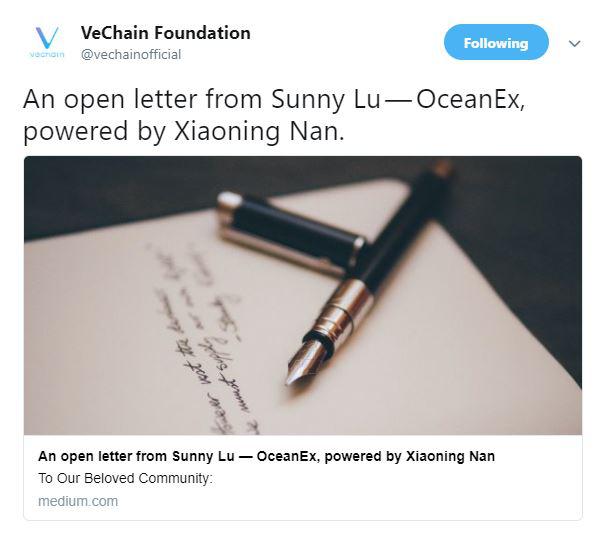 Lu states in his open letter to the VeChain community members that he has known Xiaoning Nanning before he became the CEO of OceanEx. As stated by Sunny Lu, Nanning was one of the earliest contributors to the rise of Bitcoin and blockchain in China.

“He [Xiaoning Nanning] had established a name for himself in the industry amongst the real movers and shakers compared to 99% of the “Industry Leaders” out there today. Nanning is influential in more ways than I will divulge, and likely you will get him to. He won’t tell you because he doesn’t care, in his eyes all he is Nanning, the man that hasn’t done enough for the adoption of the blockchain community.”

Lu met Nanning when he was winding up with his first blockchain startup which was the first Franchised Mining Facilities in China. Lu asked Nanning to be VeChain’s Lead Advisor because he knows Nanning as a person who cares about the future of blockchain technology and the mass adoption of this technology and that he had seen a future in VeChain which he now sees in OceanEx.

Lu also mentions in his letter that Nanning still serves as one of the most prominent voices in the Mt. Gox, a bitcoin exchange based in Shibuya, delegations. Lu praises Nanning as someone who understands what a proper exchange is, the vision it takes, the political prowess, the technological advancements, the financial restrictions, and the path it takes to change blockchain globally for the betterment of all parties.

“I know without a doubt that OceanEx will be a disrupting force on a global level. OceanEx core team includes Daniel, Jiayum, and Wei. Daniel keeps OceanEx out of trouble. Jiayu is the most badass A.I. Exchange platform architect there is. Wei knows how to get things done correctly. This team, alongside many others, have spent so many days and nights working to be part of our community, a part of ourselves.”

He ends the letter by expressing:

“he is Nanning, and that drive is contagious.”

“Proud of being a #VeChain “investor”. I love the honesty and the hard work of @sunshinelu24 and the team. Hope you will open offices in Milan. #GoVeChain.”