Binance, a blockchain platform and one of the most widely used crypto asset exchange platforms, announced that they will support the ICON [ICX] Mainnet token swap and also adds ICX/USDT pair for trading. They said they will suspend deposits and withdrawals for ICON [ICX] starting from 20th June at 05.30 IST. Binance also announced that they will handle all technical requirements involved for all users holding ICX.

Recently, Ethereum Classic [ETC] was added on both Coinbase and Binance. The announcement of Binance supporting ETC coming hours after Coinbase’s announcement.

ICON is an interchain blockchain that connects various blockchains such as Bitcoin, Ethereum, and Qtum, with ICX to be used as intermediary currency. It enables transactions among different cryptocurrencies by determining the exchange rate through DEX Reserve.

ICON had also announced a strategic partnership with Carboneum, to proactively help Carboneum with its technical development on ICON blockchain.

Binance will also open trading for the ICX/USDT trading pair on 13th June, 8:00 AM UTC, with the announcement coming just shortly before this.

On January 23rd, Binance announced that they would add the PIVX/BTC, PIVX/BNB and PIVX/ETH trading pairs. And, at that time too, some users were somewhat suspicious.

Binance has been hit by many accusations of insider trading by suspicious, perhaps even paranoid, users, while other calmer and level-headed people have attributed sudden spikes to speculative trading.

“Yes, the victims are the people on the other end of the insider trades (i.e., the people who sold their coins to the insiders before the announcement was public).”

“Tough to actually say who exactly is the culprit here. Would the PIVX team buy in just a while before the listing? Why not take advantage earlier? Is this someone off Binance team accumulating? Did the info leak to some investors? Who leaked the info?”

Here is another person who goes to much greater lengths and into greater detail about what he presents as Binance’s alleged foul play. 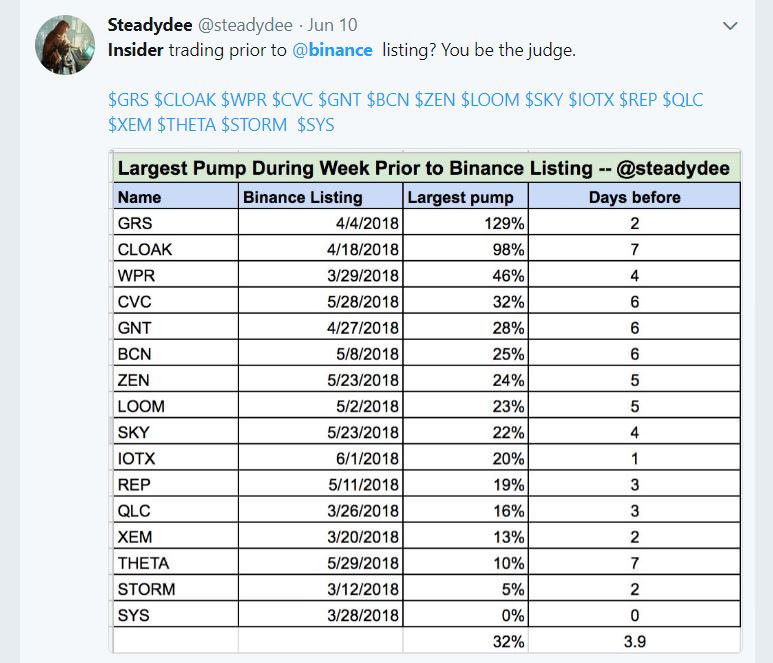 In above image, the value ‘32%’ is average pump percentage, while the value ‘3.9’ refers to an average number of days before listing on Binance.