April 18, 2021
Trending
Home Monero Monero (XMR) Technical Analysis – Not Out Of The Woods – Just Yet

Unlike many cryptocurrencies that are derivatives of Bitcoin (BTC), Monero (XMR) is based on the CryptoNight proof-of-work (PoW) hash algorithm, which comes from the CryptoNote protocol. It possesses significant algorithmic differences relating to blockchain obfuscation. By providing a high level of privacy, Monero (XMR) is fungible, meaning that every unit of the currency can be substituted by another unit. This makes Monero (XMR) different from public-ledger cryptocurrencies such as Bitcoin (BTC), where addresses with coins previously associated with the undesired activity can be blacklisted and have their coins refused by other users.

In particular, the ring signatures mix the spender’s input with a group of others, making it exponentially more difficult to establish a link between each subsequent transaction. Also, the “stealth addresses” generated for each transaction make it impossible to discover the actual destination address of a transaction by anyone else other than the sender and the receiver. Finally, the “ring confidential transactions” mechanism hides the transferred amount.

Monero (XMR) is designed to be resistant to application-specific integrated circuit (ASIC) mining, which is commonly used to mine other cryptocurrencies such as Bitcoin (BTC).

With a bit of background out of the way, last Summer, like many of its brethren, Monero was trading in a very tight manner and not doing much from a price perspective trading within the 30-40 range. At that particular time, your Author was keenly monitoring the action and was of the thought that XMR was an underappreciated and undervalued name that in essence, was neglected via the entire crypto universe of investors/traders.

However, all of that changed, as did the entire cryptocurrency landscape, when in late August, XMR awoke from its slumber and broke-out in massive fashion going on to produce 10X plus returns into the late December all-time highs with a print of 477.

Fast forward to today, and like its counterparts, XMR has and continues to find present conditions challenging – to say the least. Thus, let’s take a look at what the technical picture may have in store via the Chart below as we attempt to navigate the field without stepping on any potential landmines that may lurk in the weeds. 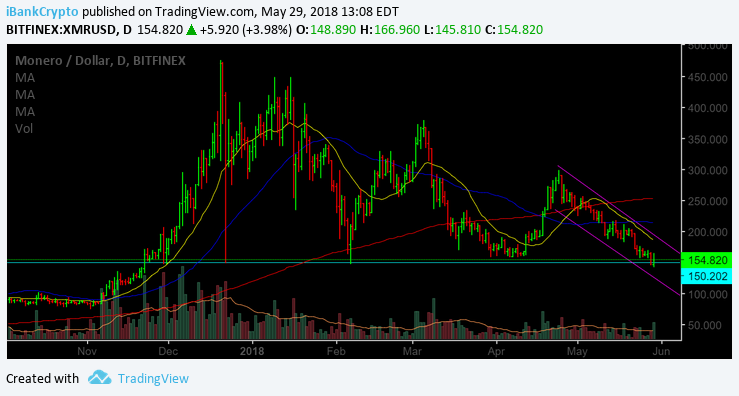 As we can observe from the daily chart above, XMR presently finds itself trading below its 20 (yellow line); 50 (blue line) and 200 (red line) day moving averages, respectively, which constitutes and unfavorable technical posture.

In addition, we can also witness that Monero is trading within a down channel, represented via the purple diagonal lines constructed.

Furthermore, XMR has recently broken important support located at the 160 level, which has precipitated further decline, where we presently reside in the mid 150’s area.

When we zoom out to the weekly time-frame, we can see from the Chart below that XMR is flirting with critical potential support at the 150 level (light blue horizontal line) and just how important that level is with respect to the present technical make-up. 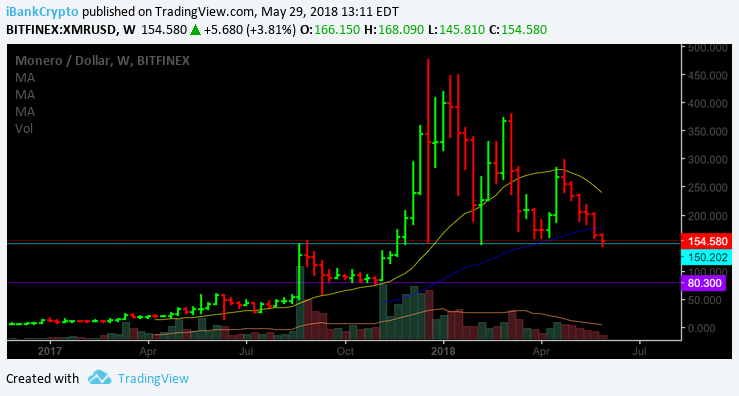 That being said, both investors/traders may want to pay extremely close attention to the action in XMR (as well as the entire cryptocurrency space) in the days/weeks ahead. While we suspect that XMR, as well as the entire cryptocurrency sphere, is due for some price relief from the recent selling pressure and may enjoy some upside price action as a result, we certainly are not of the belief that should such relief indeed materialize, that we are in any way out of the woods just yet, technically speaking.

Thus, let’s take a look at specific levels that may shed some light as well as additional clues with regards to a direction moving forward.

If, at any point in the days ahead, XMR is capable of recapturing the 160 level (former support now turned short-term potential resistance), such development, should it occur, would be a start. More importantly, if XMR can clear its 20DMA (yellow line) presently at 187.40ish as well as the 198.30 level, such accomplishment, should it materialize, would certainly alleviate some pressure. Needless to say, even if the aforementioned were to occur in the days ahead, XMR would still be trading beneath its 50 (blue line) and 200 (red line) day moving averages and remain in a poor/unfavorable technical posture.

On the flip-side of the coin, should XMR breach the 150 level and be unable to recapture such figure within a 48-72HR period, the probability and likelihood of a downdraft to the 80-85 zone, noted via the purple horizontal line on the weekly time-frame above, becomes a viable and real possibility.

Therefore, while we certainly suspect some short-term price relief in the days/weeks ahead, the technical damage inflicted during the past several weeks throughout the entire cryptocurrency universe requires time and repair.

Those who are trading this tape, be sure to keep things on a tight leash and honor your stops as risk management is a priority and paramount, as always!