Karl Ulrich, professor at Wharton earlier today tweet, with a picture of Asheesh Birla at the Penn Wharton conference talking about Ripple, where he quoted Asheesh telling that ‘getting to sign the first bank for Ripple was harder than getting a prom date’.

“My mom said I was beautiful on the inside. Just like @ripple :).” 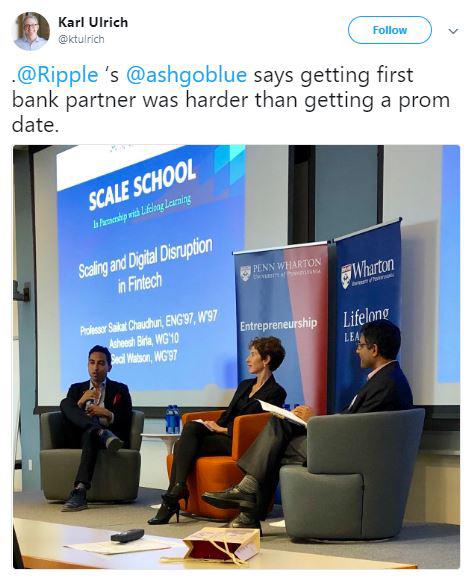 Ripple has been working with a lot of Banks, financial corporations, and financial institutions with their digital products xRapid and xCurrent for facilitating cross-border payments and funding real-time liquidity.

“The world’s largest banks have been the first to adopt Ripple’s technology, and the network effect from our customer base is accelerating.People know Ripple is the only blockchain solution for payments that is proven in the real world, and it’s driving demand from financial institutions of all kinds and sizes because they want to stay ahead of the curve.”

The National Bank of Abu Dhabi was the first Middle East bank to use Ripple for cross-border payment. They signed up with Ripple in February 2017. Ramana Kumar, Managing Director and Head of GTB Business and Product Management had said:

“At NBAD we strive to ensure our offerings are efficient and transparent. Blockchain technology transforms and paves a new way in achieving our goals and better serve our customers, adding value through accessibility and transparency. As an initial adopter and first bank to go live on Ripple, NBAD offers innovative solutions to our clients payments needs.”

On March 1st, 2017, Ripple also made an announcement of signing 47 Japanese banks. This was done using a cloud-based payments platform. This platform was called RC Cloud, powered by Ripple’s solution and which enables real-time money transfers both domestically and internationally.

“Domestic and cross-border payments have been silo processes that are expensive, but RC Cloud allows for a seamless transaction for both types of payments on one platform.”